Co-Chairman Mason was late for the meeting so the meeting was initiated by EGrzelak, Sec/Treasurer. Following her report Co-Chair Mason returned. The Treasurers report will be displayed in its normal location.

ROLL CALL:
Presesnt: VKoers, KKoers, SCox, KBowers, TClayton, JLinville, JSchatz, KFretty,
SLane(DanvilleParks)
JMason, BWEheeler Co-Chairs, EGrzelak Sec/ Tres
Absent: SBarney, SHoughton, DJacobs
WELCOME: Co-Chairman JMason The meeting was called to order at 5:30 PM by Sec/Tres/ Egrzelak. Co-Chairman welcomed and thanked all in attendance. He reminded the group that we had come a long way since our meetings to gauge interest and start raising funds in 2007. From our formal memorandum of agreement with the City of Danville in April of 2009 to the Grand Opening Gala in June 2010 and now the completion of the Special Needs section and Security on June 13, 2017. All of us here tonight along with many others aided with their time and money. Now all in the City of Danville and the surrounding area have beautiful Fetch Dog Park to enjoy. I feel sure the Espenscheid family would appreciate the beautiful addition within their gift. One of our valued early members of the Leadership Team, Ruth Schatz passed away recently. We want to recognize her memory and her contributions to our park with a tree in her honor. We share her loss with her husband and member Joe Schatz.

Review of 2016 (April 12, Nov 14 meetings) Co-Chairman JMason, DJacobs (review prior to meeting)
⦁ New projects: Special Needs Area, Security system. These are completed and have enhanced the appearance of the entry area. New signage to be discussed in present meeting. The safety and cleanliness of the park has benefited. Thanks to efforts of members and the community anonymous donors we are now debt free.
⦁ Maintenance: A special thanks to the volunteers who have performed all the work necessary: KBowers, KFretty, DJacobs, JLinville, BWheeler
⦁ Fence rails repaired and discards being left at base to discourage digging under, preservation spraying to be done on special needs fence by DJacobs soon.
⦁ Drainage working great on north end of park. Thanks to the “Bridge and Lake Mistake “engineered by JVenute.
⦁ Grass, weeds tallgrass: The weeds are being monitored and sprayed by DJacobs. Anti-Crabgrass efforts of past seasons have decreased the amount to manageable. No further action planned. The tall grass is being monitored and mowing has been contracted for. Concern about future and reliability of present mower led to decision to begin stockpiling funds for eventual replacement.
⦁ Membership: Retention and promotional effort done in past were reviewed. EGrzelak has colored brochures available for members to use and disseminate. DJacobs has made presentations to requesting clubs such as Rotary. Providing information material to stores for “stuffing” is no longer considered-not cost efficient. Development of a trial partnership with the Vermilion County Adoption Van to accompany them and have information on Fetch available to this population needs to be further evaluated. Having Leadership available in case of prolonged absence has been successfully dealt with utilizing a Co-Chairman (Brad Wheeler) and volunteers taking over areas of the Sec/Treasurer function assisting EGrzelak.
⦁ Review concluded and after a brief discussion the report and previous meetings were approved by voice vote.

TREASURER REPORT: EGrzelak report dating from November 12, 2016 to June 13, 2017. Copy of report to be attached to minutes.
Cash balance $ 3238.67
Income from membership sales $2350.00
Donations $442.00
Expenses $1734.38
Issues of fob loss, deactivation of fobs, and projected expenses were discussed and will be addressed at current meeting.
Following discussion the report was approved.

MAINTENANCE REPORT AND DISCUSSION Co-Chairman BWheeler presented and all volunteers as mentioned in summary are active and much appreciated.
⦁ Fence rails nothing new to add
⦁ Drainage worked very well during our heavy rains
⦁ Grass The weeds, tall grass, and crab grass previously discussed nothing new
⦁ BWheeler wanted to know what the Team and SLane thought about the park mowing in terms of frequency and appearance. The Team unanimously expressed support and appreciation for the mowing being done by KFretty and BWheeler. SLane concurred. Mowing would continue to be done as they judged it necessary. SLane was thanked for safely providing the gas needed and he was asked that since park was debt free should it be purchasing the gas. SLane reported the City was getting more than their money’s worth as a result of the availability of this new asset to the city parks and the mowing of the trails. The same reasoning applied to use of weed killer.
⦁ Signage TClayton presented the signage changes planned for the park. Over the past 3 months she has worked to rework the present signage to simplify the wording and reduce the number of signs. All of her efforts were communicated via email until the present format was agreed on. It was now presented to the team in its complete form as Plan 1. Printed descriptions of Plan 1 along with the Plan 2 option was provided by TClayton for clarification. All Team Members then participated in a question/answer discussion moderated by TClayton and SLane. After thorough discussion Plan 1 was formally accepted and TClayton was applauded for her excellent work and presentation. She then stated that with the help of the SLane and his department one of the signs had been completed with a slight change and she handed it to EGrzelak to present to the group. 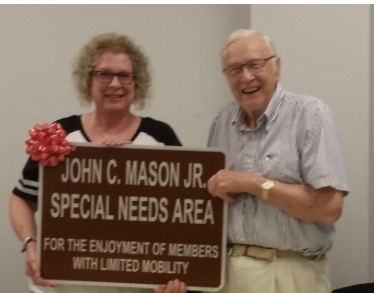 JMason was quite surprised and honored. He reflected on the history presented in the opening remarks of so many who worked to achieve the dream thanking all.

MEMBERSHIP Co-Chairman JMason
⦁ Fee Changes. With added amenities, especially the security system, and anticipated future expenses such as the new mower it was felt an increase in our fee for 2018 was necessary. The decision: $30.00 for 1 dog, $15.00 for second and any additional dogs would be $10.00 each.
Loss or damage fob replacement $20.00
Reactivation fee $5.00 (failure to renew after 30 days leads to deactivation)
⦁ Publicity and awareness
⦁ Design an updated poster for distribution Vets, etc Egrzelak JMason to pursue.
⦁ Trial event with the Vermilion County Adoption Van to provide information and membership material to interested parties. JLinville agreed to explore idea with Vermilion County animal Shelter Foundation and try to set a tentative date for the trial.
⦁ VKoers suggested we explore developing a video (ie YouTube) that could be used as a link from our Fetch Dog Park web site. Views of the site, entrances, security system, and parking with members and their dogs enjoying the area would be able to be viewed by many. It could also be used at events to illustrate the park in presentations. This suggestion was approved by all and VKoers agreed to proceed with research and development of this exciting idea.
⦁ Rules for Special Needs Area were discussed and it was felt that People with special needs had priority. Other circumstances such as dogs that needed “cool down could also use the area.
⦁ A means to identify Park Rangers other than a vest or cap was discussed. There is a definite need for this in some of the members/handlers who flagrantly ignore the rules. After discussion a lanyard system was approved. It will be implemented by EGrzelak .
WEB SITE EGrzelak The redesign of our web site has been completed and its new format is appealing and much easier to use. Thanks to Christina Hardwick who is now the owner. She has continued the great work of Steve Foster who was the founder and owner of the BEAMSCO Company for many years. He appeared at one of our early meetings and said “you need a web site to achieve your dream and I am giving you one” .Little did we realize what a great gift that was. EGrzelak discussed an additional change coming up that will be a section called Etiquette. This will help potential members become good and responsible members.

OTHER ISSUES OR BUSINESS There was none to present

ADJOURNMENT A motion for adjournment was made and seconded. The meeting ended at 7:30 PM